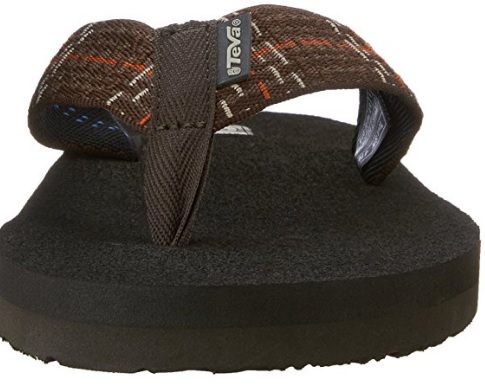 Teva have made a name for themselves as being the company that “do” water shoes.

Founded in 1984 by a Colorado river guide, who adlibbed the first floating pair of flip flops, the company have been known as the word in quality for all things watery and floppy ever since.

As the brand leaders in outdoor pursuit footwear, our anticipation levels are naturally, at fever pitch as we contemplate the Teva Mush II Men’s Flip Flop.

But will it flip into pole position or just… flop?

WHAT IS OUR FIRST IMPRESSION? 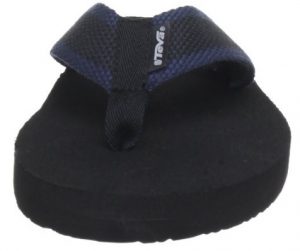 Well, the first look at the Teva Men’s Mush II are hopeful. These don’t look like an insubstantial shoe – as far as a flip flop could ever be truthfully referred to as being sturdy, we think that this pair look as if they are.

Available in a great range of truly manly designs, from Brick Black (do we know what that means – no!) or Quincy Dark Grey, it seems at least the marketing department have had a bit of fun in the naming stakes.

There are also some tartan designs, but these are really quite muted and should blend in nicely with pretty much anything you might want to wear with it.

The strap is made out of quite a strong looking fabric and the sole is synthetic. It does not look as obviously flimsy as some of the cheaper flip flops do.

The outsole comes with the promise of a “grippy” sole, because we know how some lighter flip flops can either skid or slip, especially in the wet.

And if you think about it, you will probably be wearing these in or around water, because, well, that’s kind of the point of flip flops after all.

The manufacturers also boast an EVA midsole, to provide support which may be lacking from other, less well made brands.

The branding is on the heel of the shoe – in the shape of the ‘Mush’ logo, but also there is a Teva label on the thong, between the toes.

For this particular listing, the sellers state that they will ship the footwear with either the older or the new logo – so you may be getting either version. We are not quite sure about what they mean here, as the pictures only seem to depict one type of logo.

With the first impressions being overwhelmingly favorable, the only thing that remains is to try these for size and see what the public has to say about them. 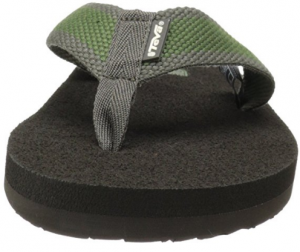 Like most flip flops, the Teva Men’s Mush II is only available in a full size. The range on sale at the time of writing, in this particular line, is between a US size 7 and a US size 14.

With 87% of customers being satisfied that these fit as expected, we are fairly reassured that these are likely to fit you and fit good.

In the very few numbers of people for whom they did not experience a perfect fit, first time, it was felt, in a minority of cases that these ran a little bit small – but not by many, it has to be said.

With its EVA midsole, we think that these flip flops offer an above average amount of support.

Obviously, we don’t really expect orthopedic performance from a mere flip flop, but because this is from the manufacturer Teva, we think that we can hope for a little more than the average.

These should give a decent level of support to your feet, especially whilst out and about and on the beach this summer – but don’t go expecting superhuman levels of comfort from them.

One or two people have complained that the fabric thong across the toes chafes them – but on balance – not that many people have had this issue.

Nearly everyone complains about some level of chafing from the bit in between the toes, of every flip flop we have ever reviewed – so the relatively small numbers of cases complaining about the Mush II is relatively encouraging.

These are marketed as the ideal beach shoe, so we would expect them to be able to deal with a certain amount of dirt, debris and of course, moisture.

Unlike some of the Teva range, these are not actually a water shoe – but they do dry out quickly after they get wet. Just bear in mind, that they aren’t actually designed to be worn in the water.

Getting them a bit wet is fine – going swimming in them is probably not advisable!

ARE THERE ANY ISSUES WITH THESE SHOES?

With an impressive 68% of people giving these shoes a five star review, we are pretty sure we can dismiss most of the gripes we have come across as being either a minority issue, or not that serious.

They might squeak a little, when you first get them. If this happens, it wears off after you have worn them in.

And a very small number of folk have found the logo uncomfortable to walk on – but not the vast majority.

SHOULD I BUY THESE FLIP FLOPS

Teva are a serious manufacturer and specialize in making flip flops as well as other types of leisure shoe.

They are experts in sandals and flip flops of all types and we trust them with our feet in general.

The Teva Mush II is no exception.