At a first glance these Liberva Leather Slip-On Loafers by manufacturer Louechy are a pretty tidy pair of shoes.

They’re available in eight styles and shades and fit the bill as a gentleman’s loafer, to be worn whilst driving.

The fact that they have got driving in the original listings title, means that they are clearly intended for this purpose. The makers have described them as ‘casual’ and that they can also be used as a slipper.

This tells us one or two things, immediately.

Whenever a shoe is described as a ‘driving’ shoe, much less that it may double up as a slipper, then it is dropping rather a large hint that it is probably not going to see us trekking around the Hindu Kush in them. In some cases, we would be lucky to make it to the post office and back.

But we shall reserve judgement and see what people have to say about the exact specifications of these ‘driving’ shoes?

These are clearly a loafer, but the style has a few variations, all within the same name of “Liberva”.

There are three variations on these design; the straightforward color style, the Punch and the Penny.

The original style comes in Ochre, Brown and Black. It has a hand stitched leather upper (they all do) which has large stitching around the contours of the foot.

This is probably the most simple variant, which looks like a classic loafer and in the yellowy ochre color, only the tiniest bit like a Cornish pasty.

The rubber sole has chunky circular columns on the underside, for improved traction and gripping to wheels.

The Punch is the design that has the lattice style holes in the upper. This is an attractive variation on the original shoe and delivers an added airiness to the shoe, making it refreshing and light on the feet, if this is what you want.

Both the original and the Punch come in a soft looking leather, which is comfortable and accommodating looking.

The Penny is the notable exception to the other two. It appears to be made of a firmer leather than the other two and has more of a decorative band over the bridge of the foot.

Out of all the three styles, this is the version we would pick if we wanted something a tad dressier.

It looks the most sturdy and dare we say it, slightly more appropriate for the office.

All three of these styles come in Black, Ochre and Brown and are all lightweight to have on.

Because they are so soft, the heel can be pressed down to create a slipper effect – although we are convinced that this is more viable on the plain and the Punch design.

The sizing of this loafer ranges from a 6.5 to a 12. We feel this should be plenty of choice for most people.

It only appears to come in a standard width and in terms of customer satisfaction, more than three quarters seemed happy with their fit.

For the quarter who didn’t quite get the right size the first time around, slightly more than not thought that the style runs a bit small.

It is possible there has been some confusion with regards to transposing the Chinese sizing into a US market, but then again, most people thought they fit just fine.

We would probably advise anyone with a wider foot to size up, though, as they appear to be possibly slightly narrow. 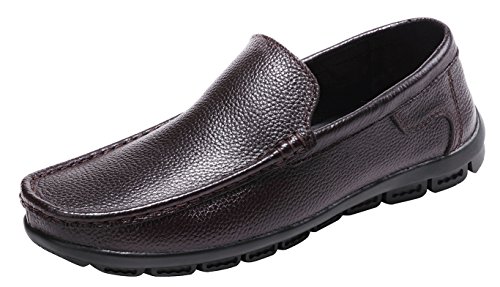 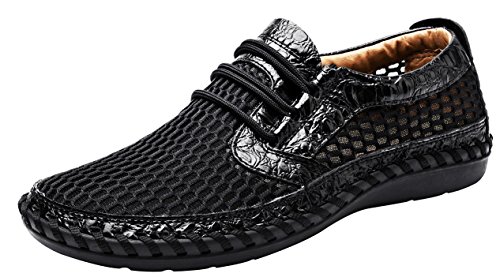 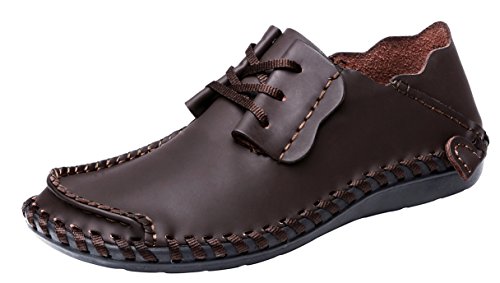 When all is said and done, these Louechy Men’s Liberva Slip On Loafers are probably best worn indoors.

From all accounts, we don’t get the impression that these are going to stay the distance in any sort of long march or walk.

These are not incredibly waterproof and probably not designed for slippery, let alone muddy terrain.

So, what are the chunky rubber soles there for then? You might well be wondering.

We think that the soles are specifically designed to grip to the pedals of your car, rather than the clamber about on wet rock formations or anything like that. We’re not even entirely convinced these should be allowed out onto a wet sidewalk for too long, as it might ruin them.

If you are happy to wear these in the office, or at home, we think they will be fine; other than that, they should be good for driving in, but that is as far as it should go.

ARE THERE ANY ISSUES WITH THESE SHOES?

The main issues with these Men’s Liberva Leather Slip On Loafers is that they don’t provide incredible amounts of support.

But this is alright, if you know what you have purchased them for.

Because these are for casual use and not heavy duty walking in, they shouldn’t really be expected to provide lots of support for your arches. In fact, if you have a serious podiatry condition, then we probably wouldn’t advise these for you.

SHOULD I BUY THESE LOAFERS?

We like these Liberva Men’s Loafers, by slightly mysterious manufacturer Louechy.

Although we can’t find a whole lot out about this maker, at the time of writing, other than they produce shoes and some other accessories, we are pleased with the overall look and feel of these shoes.

They are not a premium brand and are priced modestly.

For the price range that they come in, we think they perform reasonably well and look incredibly smart.

Perhaps they will not last forever and maybe some care needs to be taken, when it comes to how and where you wear them.