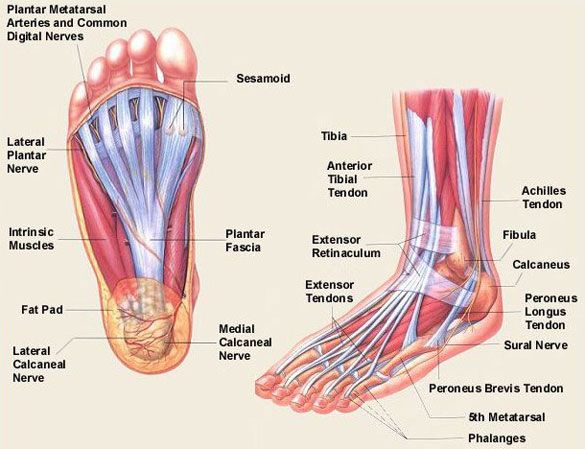 If you have the privilege to learn some things you don’t know about your foot, will you make good use of the opportunity?

If your response is no, then I suggest you close the tab right now and if it is a yes, then let’s get on with the overview of the structure and function of the foot. 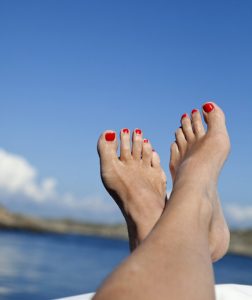 The human foot contains about 26 bones, 33 joints and more than 100 ligaments, tendons and muscles.

Does it not sound just like overkill for that flat structure knowing fully well that it supports the weight of the whole body? That’s to tell you what the foot is comprised of and the work it does.

The primary reason you can still stand today is that your feet it is in a good state. The foot is responsible for supporting and balancing the body’s weight.

Therefore it is required that the foot remains healthy and in excellent condition for you to have a proper body posture while standing at different positions and angles.

Now, let’s talk a little bit about the structure of the foot!

Overview of the bones in the foot

•    The phalanges, which are the bones in your toes

•    The metatarsals, which run through the flat part of your foot

•    The cuneiform bones, the navicular, and the cuboid, all of which function to give your foot a solid yet somewhat flexible foundation

•    The calcaneus, which is the bone in your heel

•    The talus, which is the bone in your ankle

•    The talus connects to the tibia, which is the main bone in your lower leg

The human foot is divided into three categories such as the forefoot, the midfoot and the hind foot.

The forefoot comprises of the five metatarsal bones and the phalanges known as the toes. The shortest among them is the first metatarsal which is also the thickest, and it plays a significant role during forward movement.

Closer to the head of the first metatarsal is two sesamoid bones that are joined together by tendons and ligaments.

The second, third, fourth and fifth metatarsal bones of the forefoot are more stable because they are protected and not exposed to excessive pulling forces.

The midfoot is a pyramid-like collection of bones which constitute the arches of the feet. It includes five of the seven tarsal bones known as the navicular, cuboid and three cuneiforms.

The forefoot and the midfoot join together at the five tarsometatarsal joints. 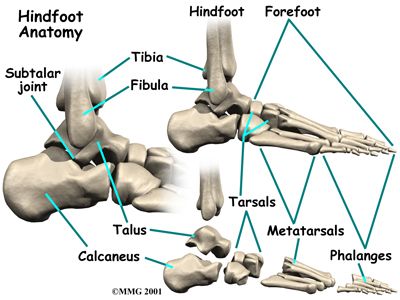 The hindfoot forms the ankle and heel, and it is made up of the two large bones on foot known as the talus and calcaneus.

The largest tarsal bone is the calcaneus and it is the one that forms the heel while the talus forms the pivot of the ankle.

The two essential functions of the foot are to bear the weight of the body and for movement. To execute both services, it has to be flexible and maintain a high degree of stability.

The human foot has three arches such as:

Medial longitudinal arch: it comprises of the calcaneus, navicular, talus, cuneiforms, and the three metatarsals and is very important than the remaining two.

Lateral longitudinal arch: it is composed of the calcaneus, cuboid and the fourth and fifth metatarsals.

Transverse arch: it is composed of the cuneiform, cuboid and as well the five metatarsals bases of the foot known as the toes.

The ligament is the flexible tissue that joins two bones together. They are solid and quite hard to injure. The only injury that can occur to ligaments is the sprain which is the tear or wear of the ligaments.

But the injuries can as well be more dangerous, and when such happens, it becomes an issue because ligaments do not receive blood flow like the bones and muscle does and so they are very slow to repair themselves.

The foot isn’t only comprised of ligaments but as well have subordinates, and a vital one is the muscles.

Just as ligaments join two joints together, there is a thick band as well that joins the muscles to the bones, and it is called the tendons. It is responsible for the movement as that occurs whenever the muscles pull on the bones. 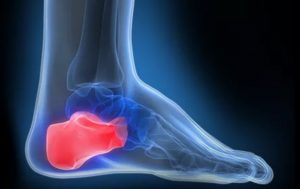 Plantar fasciitis: it is caused as a result of the inflammation in the plantar fascia ligament around the bottom of the foot. It is accompanied by pain in the heel and arch.

Athlete’s foot: it is caused by the infection of the feet leading to dry, flaking, red, and irritated skin.

Heel spurs: An abnormal growth of bone in the heel, which may cause severe pain during walking or standing. People with plantar fasciitis, flat feet, or high arches are more likely to develop heel spurs.

Fallen arches (flat feet): it can be corrected with orthotics shoe.

Metatarsagal: this is caused by outworking of the feet and by wearing ill0fitting shoes and its accompanied by pain and inflammation in the ball of the foot.

Fracture: the bone that is liable for any damages is the metatarsal either from injury or repetitive use. It is accompanied by swelling, pain, redness, and bruising.

Osteoarthritis of the feet:  it is caused by wear and tear of the components in the feet and also as a result of age.  It is accompanied by pain and swelling in the feet.

Orthotics devices: this helps to correct and treat some feet deformities as it is constructed to give optimal support to the feet. Examples are shoes and sandal that are built with arch and heel support.

Physical therapy: it involves lots of physical activities that require strength, and support of the feet and ankles.

Feet surgery: in some cases, the right choice is to go for a surgical operation.